Can't believe it's here already! Just finished packing for my flight to NOLA tomorrow for Authors After Dark 2012!

Here's my schedule, if any of you want to stalk me. LOL!

I'll also be helping to staff the Riptide Publishing table a few hours each day, as well as leading a pilgrimage to the legendary Cafe du Monde for coffee and beignets. No set time thus far - although considering the heat, we may have to go at midnight!

I'm not hard to find - just look for the chunky blonde with glasses and tattoos on both arms!

Assuming you haven’t been living in Antarctica for the past six months, I’m sure you’ve all heard of That Book. The one with a gray silk tie on the cover. The one with the Too Stupid To Live virgin heroine who mutters “crap” and “double crap,” and comes at the drop of a hat. The one with the tortured, twenty-six year old billionaire hero who speaks fluent French, is a concert-level pianist and a trained pilot, not to mention tall and gorgeous, with a gigantic cock. The one that started out as (*choke*) Twilight fan fiction.

It’s bad enough that I can’t avoid seeing it mentioned online at least a dozen times a day, but when I walked into Target last Saturday and practically tripped over a huge display of gray-tinted paperbacks, my “Fuck this!”o-meter tipped dangerously into the red. I glared at that rack of books, sorely tempted to grab a baseball bat from three aisles down and smash it to bits.

I did a slow burn until I got home, got on Twitter and started bitching. Then the very wise Tibby Armstrong made a great suggestion – something so obvious and simple, I could’ve smacked myself for not thinking of it first.

It’s convention season, which means my back bedroom is full of postcards, fridge magnets, t-shirts, tote bags, etc. I always keep a few postcards in my purse, because you never know who you’re going to run into, and a savvy author’s always ready for promo. So, guess what? Next time I see a paperback with “EL James” on the cover, I’m going to whip out my postcards and stick one inside.

#OccupyFiftyShades! Pass it on! ☺
Posted by Cat Grant at 11:50 AM No comments:

Today, at the ripe old age of 52, I got my first tat! Stung like hell, but OMG, what an endorphin rush! Here's the lovely artwork: 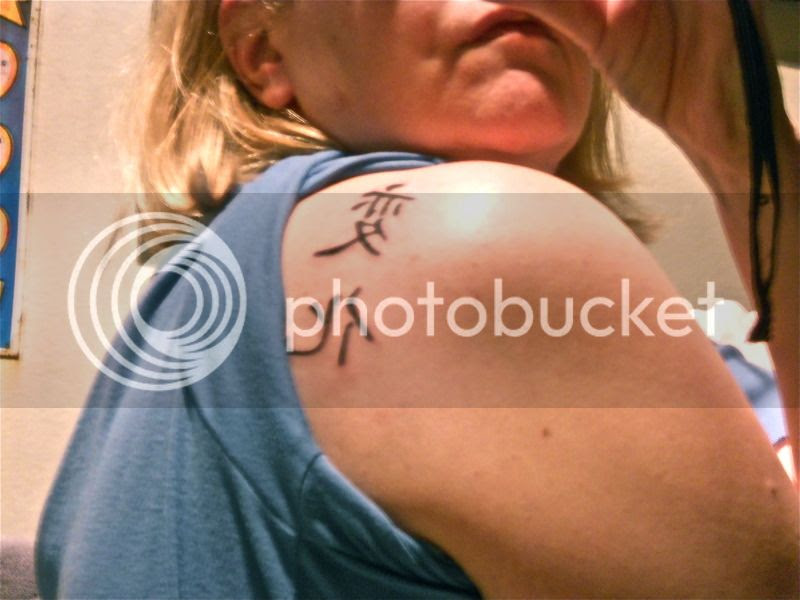 It's the Kanji symbol for "change." I plan to get the symbol for "rebirth" on my right shoulder once this one's healed. Pretty cool, huh? :-)
Posted by Cat Grant at 8:55 PM 1 comment:

Those rent boys get 'em every time! :)

Here's something that brightened my day - an early review for my rent boy novella Priceless, coming May 14th from Riptide Publishing! Thanks, Jenre, for the lovely review! :)
Posted by Cat Grant at 12:02 PM No comments:

And leave a comment on my co-author Rachel Haimowitz's guest blog to win a backlist paperback from one of us -- and maybe even a classic Nook! :)
Posted by Cat Grant at 9:58 AM No comments:

Or, as I prefer to call it, Happy Chocolate Bunny Day!

And if you'd like to get yourself a gift that won't make your hips any wider, Power Play: Resistance is now available on Kindle!

You can also pre-order the paperback here.

As for me, I'm relaxing with the sublime Juan Diego Florez in Rossini's Le Comte Ory! Talk about ear candy! :)
Posted by Cat Grant at 2:31 PM No comments:

Due to popular demand and the upcoming holiday, Power Play: Resistance, which was due on April 9th, is NOW AVAILABLE for download at the Riptide Publishing website!!

Go forth and read! And a very happy Easter to those of you who celebrate it! :)
Posted by Cat Grant at 11:23 AM No comments: